Had the opportunity to be invited from Stephen Foskett (Organizer in Chief at Tech Field Days) – Cloud Field Days at Cohesity – one of the attractive companies covering lot of the Secondary Storage Data including Cloud and supporting AWS, Azure & GCP. Cohesity as Data Platform company is taking care to bring simplicity in your data centers (on-prem & Cloud).

We had high technical presentation and live Demos – yes, live demos never fails in the Cohesity (at least till the last one that we had) with super technical staff: Rawlinson Rivera, Aaron Delp, Sai Mukundan, Jon Hildebrand, Sameer Nori, Dayanand Sharma etc.

Cohesity has lot of the Cloud solution for your Data in the Cloud like: Long-term retention (VM Migration) for Archive Data to the Cloud, Storage tiering to move cold Data to the Cloud, Test/Dev – provision new Apps or move on-prem Apps to the Cloud, Apps mobility across DataCenter & Public Cloud, Full Lifecycle Disaster Recovery for Failover & Failback + Granular Recovery using the Cloud for cost-effective DR, Multi-Cloud mobility so you can move data between clouds, Direct Backup to Cloud, (new) Cloud Native backup to automate backup of Cloud Apps.

So all above are ready based on Cohesity Cloud key capabilities:
Cloud Archive
Cloud Tier
Cloud Replicate
Cloud Edition
Cloud Retrieve
Cloud Spin (new) – spinning up on-prem VMs in the public Cloud, policy based for schedule/setup the backup to be converted and stored in the cloud without need to run Cohesity in the cloud so the VM can be activated in the cloud.
Native API Integration –  Integration with public Cloud snapshot APIs for the native backup of cloud applications.
All of these operations can be done via their super simple GUI just in few clicks and super monitoring dashboards.

So in general Cohesity supports all public Cloud providers like AWS, Azure & GCP so regarding the Cloud it has Dataplatform Virtual Edition for the ROBO/Edge as well as DataPlatform Cloud Edition for AWS, Azure, GCP and Compatible Cloud (S3/NFS). Also you can scale very fast (Web-Scale), it has Global Deduplication, you can Clone and Snapshot in infinite way, Global indexing for all objects, Security and QoS. – One Software Platform for Multiple Cloud Use Cases.

I can say that the Cohesity is super player in the Global market to cover your Secondary Storage in anyway that you can imagine!

It is highly important that data needs to be backed up and there should be an effective Disaster Recovery plan in case of data threat or a catastrophe. While data continues to grow and there are number of technology providers who offer better and comprehensive storage techniques to businesses, there has not been an alternative to the concept of backup. While costs are a major factor for businesses, having a steady backup plan to counter data threats and compliant to strict regulatory standards(including the upcoming EU’s GDPR) is necessary. Be it virtual environment backup like VMware Backup, Microsoft Hyper-V Backup or legacy environment backup like Windows Server Backup, Workstation backup, Vembu BDR Suite has been offering Backup & Recovery with their own file-system, VembuHIVE thereby easing the backup process, storage management at an extremely affordable pricing.

Last week, they did announce the release of Vembu BDR Suite v3.9.0 which offers manifold features and enhancements to meet the different needs of Diverse IT environments. According to them, the overall goal of the new version v3.9.0 is to provide advancements in terms of Storage, Security, and Data Restoration.

Vembu BDR Suite v3.9.0 release is distinct because a number of critical features are incorporated for maintaining business continuity and to function effectively for high availability. Here are some of the key highlights of this release:

Vembu now provides the popular 3-2-1 backup strategy( copies of backup in 2 medias(Disk and Tape) and 1 backup copy at offsite) to businesses by announcing the support for Native Tape Backup for  Image-based Backups (VMware, Hyper-V, and Physical Windows Servers & Workstations) providing an option for Long-Term Archival and Offsite storage.  Also, Vembu Tape Backup Support makes the DR possible on any physical or virtual environment. Thus Vembu Tape backup is designed keeping in mind the future needs of the ever evolving IT demands.

As we speak of data backup, recovery of data is equally important, if not more. While data recovery is crucial, the amount of time taken to restore data decides the business continuity of any organization. In the previous versions, Vembu has provided instant recovery capabilities only for VMware Backups from the GUI. From this release v3.9.0, Vembu makes the instant recovery process much simpler and quicker than before by making the Quick VM Recovery possible on VMware ESXi from Vembu BDR backup server console for all image-based backups(VMware, Hyper-V and Microsoft Windows). Thus, Vembu lowers the Recovery Time Objectives of the organizations and provides quicker data regain and access.

With the newest release, Vembu provides the ability to encrypt the data while creating a backup job. Each backup job that is configured from the distributed agents or through the Vembu BDR backup server is now highly secured through Backup-level Encryption. By using customized passwords, users will now be able to enable additional security for their backup jobs. And the backup data can be restored/accessed only by providing the password. Thus, the data is encrypted and can only be accessed by authorized users. This step is to fight data threats and also to ensure data compliances. 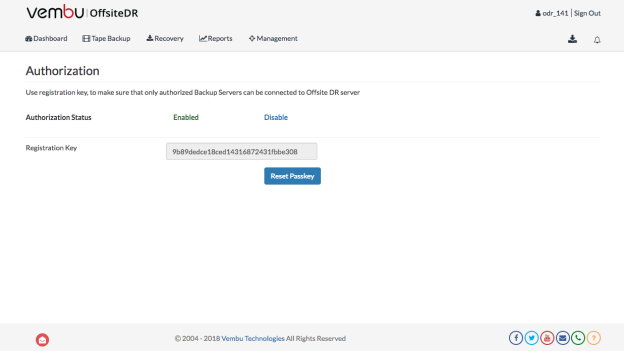 Many businesses are in a need to execute certain business logic before or after a backup job. But running these logics manually through scripts is difficult and is not feasible for organizations having multiple backup jobs running in their IT infrastructure. To make this process simpler, Vembu BDR Suite v3.9.0 provides a separate wizard in NetworkBackup, OnlineBackup and ImageBackup clients, where one can add a number of pre and post executable commands/scripts. This helps in automatically executing the added commands/scripts at specific stages based on the configuration and provides the ability to run the custom actions before/after the backup schedules.

Besides all the listed features, Vembu BDR Suite v3.9.0 has few interesting features like Windows Event Viewer Integration along with some Enhancements.

Vembu soon will bring out the new version 3.9.0 and they just prepared some new cool features that will be very welcome to the current customers and also to those who wants to have a complete tool for the Backup and DR.

Take a look to the new incoming features:

Vembu extends its support to native tape backup through the Vembu BDR console. You can utilize the best known 3-2-1 backup strategy of having 3 copies of backup data in 2 different media and 1 off-site location for an efficient DR plan. This secondary backup approach will help you to archive the image based backups in both virtual and physical environments like VMware, Hyper-V and Windows Servers and recover them in multiple formats like VHD, VMDK, VHDX, VMDK-Flat and RAW.

Enabling the auto authorization feature will allow only the authorized Vembu BDR servers to get connected with Vembu OffsiteDR servers (Replication) using the registration key.

Instant recovery of backed up data on VMware ESXi is now made available for both the Hyper-V VMs and Windows Servers backup jobs for an effective Disaster Recovery. This recovery of the virtual machines happens in a matter of seconds by booting the backed up machine directly from the backup storage repository, from where all the files, folders and applications can be accessed.

All the events of the Vembu BDR, Off-siteDR & agents like information on critical, warnings and major events are updated in the Event Viewer of Windows Servers  when enabled for better management.

Users will be able to configure AES-256 bit encryption for all their backup jobs of VMware, Hyper-V, Disk Image through their customized passwords using corresponding password hints as well.

OffsiteDR retention policies is now available for the Network Backup plugins too, like the image based backups of VMware, Hyper-V and Disk Image backups at the too.

The listing of files and folders while configuring backups on a Network Backup plugin is now up with the aciTree structure for easy and quick navigation.

This feature provides the ability to configure running custom actions before and after the execution backup schedule. The custom actions may include running an application using some script files.

The overall UI of Vembu OnlineBackup is improved for better performance like the current Vembu BDR and Off-siteDR.

Update of consumed space on the Vembu Portal:

Based on the display of the consumed space of Vembu Online Backup and SaaSBackup plugins, the customer will be able to allocate and purchase further cloud storage post purchase and upgrade.